summary: in Kubernetes, a Service is a L4(TCP/UDP/SCTP) load balancer, it uses the DNAT to redirect inbound traffic to backend pods. The redirecting is performed by kube-proxy, which sits on every node. In this post, we will introduce when working in iptables mode, how kube-proxy handles the forwarding of traffics.

kube-proxy triggers the configure of routing rules by watching kube-apiserver for the addition and removal of Service and Endpoints objects, currently, it supports three different operation modes:

In this mode, for each Service, it opens a port(randomly chosen) on the local node. Any connections to this “proxy port” are proxied to one of the Service’s backend Pods. It is not commonly used as it is slow and outdated.

This mode calls netlink interface to create IPVS rules accordingly and synchronizes IPVS rules with Kubernetes Services and Endpoints periodically. it requires the Linux kernel to have the IPVS modules loaded.

This configuration denotes if this Service desires to route external traffic to node-local or cluster-wide endpoints. There are two available options: Cluster(default) and Local

It is the default option, and has the following attributes: 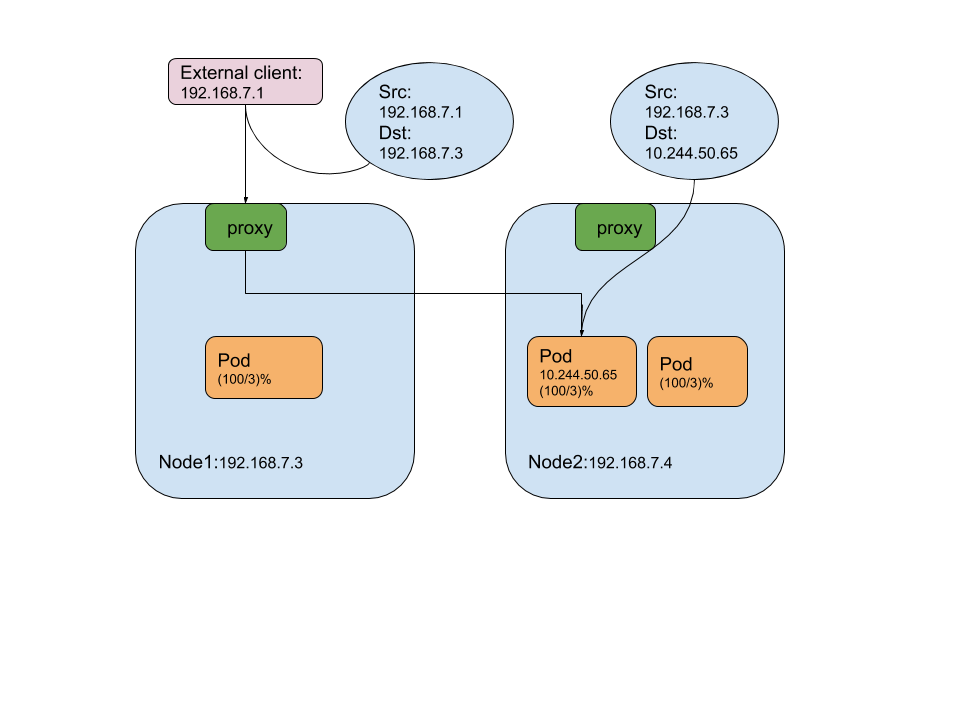 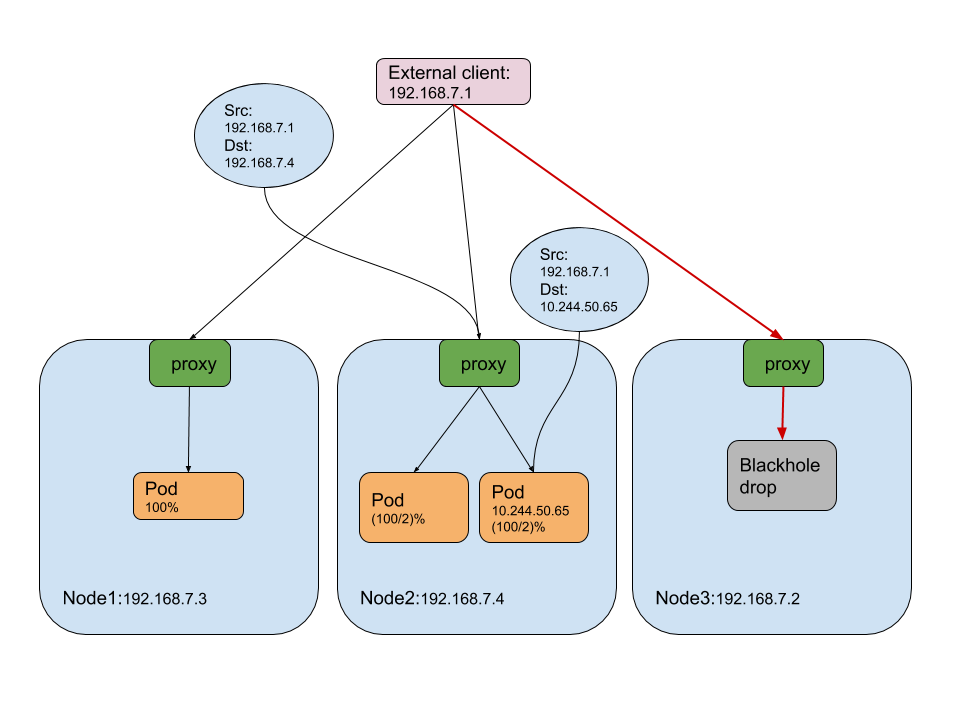 Several chains of iptables are programed to do all kinds of filtering and NAT between pods and services when a Service or Endpoint object is created. 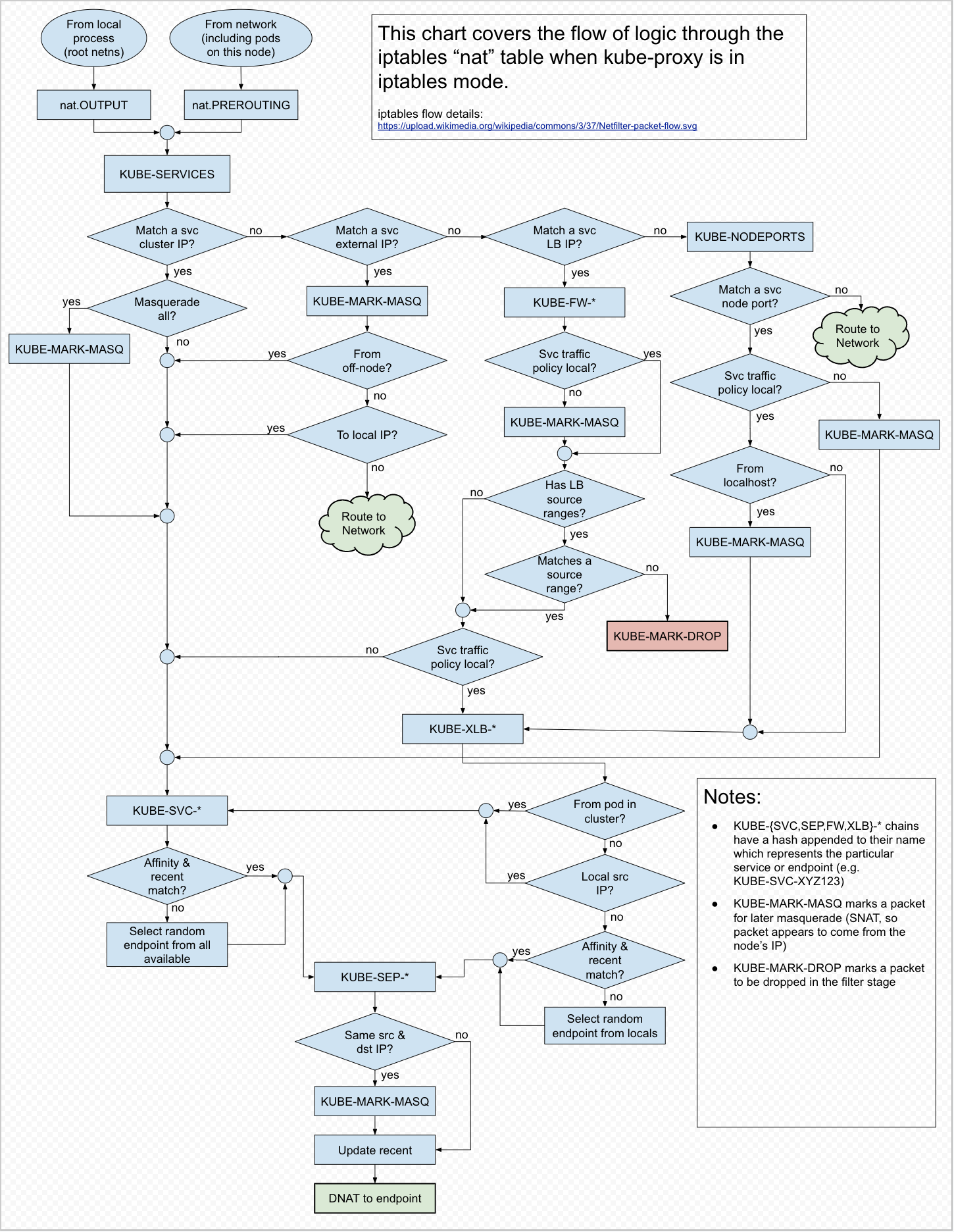 Now that we have the basic concept of kube-proxy in mind, let’s explain them in practice.

Since LoadBalance is not support in the cluster, the practices will only focus on NodePort & ClusterIP this time.

Our testing cluster is deployed using cactus, the kubernetes version is v1.17.3, setting up 4 VMs(1 masters, 3 workers) with the lab definition pod11. The network setup is shown below:

The pod backends are managed by a deployment echo with 3 pod replicas.

To simulate the in-cluster communications and for debug purpose, we also set up a debug pod in leveraging image nicolaka/netshoot:latest, which is widely used in kubectl-debug

With different configurations, in the following, we will discuss 5 type of ClusterIP services:

If namespace is not specified, dns server attaches the namespace from the source pod, if accessing a service of the other namespace is required, we should attach namespace obviously. For instance, nslookup-ing ‘echo’ service in ‘extra’ namespace will be like:

From the chains of PREROUTING and OUTPUT we can see, all data packets incoming or outgoing of Pods enters the chain KUBE-SERVICES as the starting point, in this case, all inbound traffics come into service echo(matched by destination IP 10.104.16.232 and port 6711), will be processed by two rules in ordinal:

2) then, the packet flows into chain KUBE-SVC-U52O5CQH2XXNVZ54

From below we can see, when accessing the service externally(not from pods), the source IP is replaced with nodeIP;

when the packet comes from the internal pod–the ‘debug’ pod, the source IP remains it is.

In the chain KUBE-SVC-U52O5CQH2XXNVZ54, the load balancing between pods is performed by iptables module ‘statistic’. It distributes packet to KUBE-SEP-* randomly with the ‘probability’ setting.

Each KUBE-SEP-* chain represents a pod or endpoint respectively. It includes two actions:

1) packet escaping from the pod is source NAT-ed with host’s docker0 IP. 2) packet coming into the pod is DNAT-ed with pod’s ip, then routes to the backend pod.

Kubernetes supports ClientIP based session affinity, session affinity makes sure that requests from the same particular client are passed to the same backend server, which means pod in kubernetes.

A session affinity service is defined as:

After creating the service in kubernetes, a service and endpoint are created:

The difference between ‘normal’ ClusterIP and ClusterIP with session affinity is beside distributing requests coming into the service for the first time leveraging ‘statistic’ iptables module, kube-proxy will also apply ‘recent’ module for not the first time visitors, the timeout checkout time is 10800s by default. it can be reset by service.spec.sessionAffinityConfig.clientIP.timeoutSeconds. The iptables configurations look like below:

If there are external IPs that route to one or more cluster nodes, Kubernetes Services can be exposed on those externalIPs. Traffic that ingresses into the cluster with the external IP (as destination IP), on the Service port, will be routed to one of the Service endpoints.

In our environment, ‘172.0.11.33’ is a ip located on node master01, can be accessed externally, considering it as an external ip, the service is defined:

so, the service and endpoint is:

The corresponding rules in the chain KUBE-SERVICES are as below, due to the chains of KUBE-SVC- and KUBE-SEP- is very similar to normal service, we will not show them thereafter:

Next 3 chains is unique to the external ip type. It employs physdev module to identify traffics from bridge device and perform NAT operation. The second rule from the bottom denotes requests from neither local nor bridge interface are passed in to chain KUBE-SVC for load balancing.

A cluster IP is always associated with backend pods by selector. If no pod matches Service’s selector, the service will be created with no endpoints referring to it, in that case, there will be no iptables rules created for routing traffics.

The created service, endpoint and iptables rules would be:

And if a Service has no selector defined, the endpoint would be not created at all.

Sometimes you don’t need load-balancing and a single Service IP. In this case, you can create what are termed “headless” Services, by explicitly specifying “None” for the cluster IP (.spec.clusterIP).

The headless service definition of ‘echo’ is:

After kubectl apply, the service controller and endpoint controller will create the following objects:

However, from iptables, no chains or rules is created, by checking DNS records, shows it uses pod’s IP directly.

Kubernetes exposes service with nodeIP:nodePort by deploying NodePort type service, by doing so, kubernetes creates a ClusterIP service, to which the NodePort service will route, and meanwhile opens a specific port(node port) on all the Nodes, and any traffic that is sent to this port is forwarded to destination pod.

The entry point of iptables rules for performing NodePort trafficing is ‘-A KUBE-SERVICES -m comment –comment “kubernetes service nodeports; NOTE: this must be the last rule in this chain” -m addrtype –dst-type LOCAL -j KUBE-NODEPORTS’, this rule is the last one in KUBE-SERVICES chain, it indicates that if a visiting packet is not matched by any of the anterior rules, it is forwarded into KUBE-NODEPORTS chain for further processing.

In the following subsection, we will discuss 2 types of NodePort service:

A NodePort service with no customization would create an externalTrafficPolicy: Cluster type service. The manifest is written in below:

The service and endpoints are created:

As we can see from the above, the port 30398 is assigned to the service ‘echo-np’. On each node, kube-proxy allocating a listening port for it:

From iptables’ perspective, each two sets of chains & rules are added to the chain KUBE-SERVICES & KUBE-NODEPORTS separately:

Regarding KUBE-SERVICES chain, it is used for the cluster ip accessing, for detailed information, please reference ‘normal ClusterIP service’.

KUBE-NODEPORTS denotes that all packets accessing port 30398, firstly is SNAT-ed, then goes into KUBE-SVC chain for load balancing to select a pod to route to.

Using “externalTrafficPolicy: Local” will preserve source IP and drop packets from node has no local endpoint. It is defined as:

The chain of KUBE-NODEPORTS is different between the nodes have local endpoints and those haven’t. in our cluster, ‘echo’ pod is not scheduled on master01 node, so when we trying to access the service by master01’s nodeIP, the packet will be dropped by the rule ‘-A KUBE-XLB-WVR3FY6OQL4XX3DZ -m comment –comment “default/echo-local: has no local endpoints” -j KUBE-MARK-DROP’. On the contrary, when accessing the service by minion01’s nodeIP, it will be forwarded to pod ‘echo-75548f949f-7r575’(which is scheduled on minion01 node) directly, by rule ‘-A KUBE-XLB-WVR3FY6OQL4XX3DZ -m comment –comment “Balancing rule 0 for default/echo-local:” -j KUBE-SEP-FO5ZQ232FWC5GK4A’

The chains and rules on the pod-owned nodes is look like:

Accessing from master01’s node IP is forbiddened, but not for minion01. And from minion01’s response we can see source IP is not SNAT-ed by nodeIP.